Requirements to Change State of Residency

Wealthy clients from high tax states will often consider moving to a lower taxed state to save taxes. These taxes may involve state income taxes and state estate taxes. You may have heard  people say “If I live for more than 180 days in a particular state, then my residence has been changed for state taxes”. This statement has a small degree of truth to it, but it is far from accurate. Prior to 1996, certain states would seek out former residents to try to tax their retirement income payments in the state where the individual lived during their working career.  In 1996, this state recovery practice ended with the passage of “source tax” relief which was signed into law by President Clinton.

This federal law (Title 4 United States Code (USC), Chapter 4, Section 114) prevents states from taxing former residents on all distributions received from any type of qualified retirement plan or IRA after they become legal residents of another state.  The key phrase is “legal resident”.  It makes no difference if the distribution is in a lump sum or a series of payments.  Only the state where the participant legally resides will be able to levy state income tax on qualified plan or IRA distributions.

In reality, New York and other high income tax states had carried out an active campaign to tax qualified plan benefits when received by former residents.  The tax collection tactics of these high tax “source” theory states was made illegal by Title 4 USC, Chapter 4, Section 114.  This Federal law prohibits states from taxing non-residents on qualified plan and IRA retirement income.

The second major state tax that many individuals face is found in those states that levy state estate taxes at the death of a resident.  About 18 states currently tax the gross estate of an individual at death.  Many of these states are found in the Northeastern part of the U.S.  Generally, the estate state tax rates range from about 6% to 16% with a variety of exemptions.

Based on state income taxes and state estate taxes alone, certain individuals and married couples often decide that it would be in their best financial interest to permanently move to a lower taxed state.  States that have both $0 income taxes on retirement benefits and $0 estate taxes would be particularly favored as choices for permanent residency (i.e. Florida, Texas, Nevada, New Hampshire, Alaska, South Dakota, and Wyoming).

Changing residency is not as easy as you may think.  Many states have multiple tests that look at the connections an individual may have to a state to determine residency.  What steps must be taken to sever connections with the old state and establish strong ties with the new state to document a change of residency?

Many states determine tax residency by looking at where the individual has the closest connections.  State courts and state tax regulators will consider many factors to determine residency for tax purposes.  Here is a list of some of those important factors:

Generally, the factors listed above will determine in which state the individual is most closely connected.  It is the strength of these connections created in the new state which will ultimately determine residency for state income and estate tax purposes.

Your clients who are considering moving to a new state should have a formal plan to terminate connections with the old state.  A successful change of residency can save hundreds of thousands or even millions of dollars of combined state income taxes and state death taxes.

No matter in which state your client is seeking to establish permanent residency for state tax purposes, federal income taxes will still be due on their qualified plan and IRA retirement benefits.  Estates of individuals in excess of the federal exemption amount ($5,490,000 in 2017) will still have federal estate taxes due no matter where their assets are located in the United States.

Contact BSMG Advanced Sales for a state by state reference for state income taxes and state estate taxes.  Your client’s estate planning attorney and tax advisors will play a critical role in advising your clients who are considering a permanent change of residency. 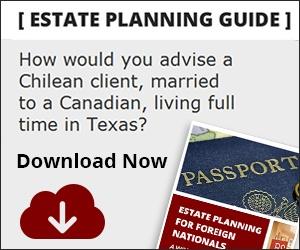