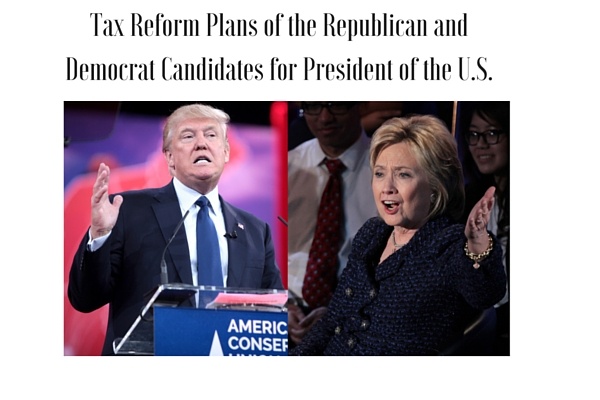 UPDATE: If you've seen the news this morning, you know that Trump made major changes to his tax plan yesterday. We wanted to bring you the latest update on the candidates tax reform plans to keep you informed.

Donald Trump (R) and Hillary Clinton (D) have released their tax reform proposals which we have received and summarized here.

As we all know, the U.S. Senate and U.S. House will have very large input into what proposals actually appear in any formal bills that are filed for consideration; and the House Ways and Means Committee and the Senate Finance Committee will weigh in with their hearings on any tax reform proposals as well.

Whether the tax reform proposals will tilt more toward the Republican view, the Democrat view, or some compromised view will depend on who wins the Presidency and which political party controls the Senate and the House after the November 2016 elections.  No matter who wins the Presidency, personal and business tax reform will be on the agenda of the U.S. Congress in 2017.

Here is a summary of the tax reform plans of Republican candidate Donald Trump:

Here is a summary of the tax reform plans of Democrat candidate Hillary Clinton:

It’s hard to determine what impact the tax reforms summarized above would have on the U.S. economy going forward.  The current annual U.S. budget deficit is projected to be around $500 billion when the next candidate takes office.  The cumulative U.S. national debt is approximately $19 trillion which is about 105% of current gross domestic product (GDP) of $18 trillion.  Any tax cuts that get enacted into law will probably have to be offset with significant spending cuts as well.

U.S. government spending will have to be addressed going forward as millions of “baby boomers” have started to enter their retirement years.  This large generation will put pressure on the Social Security, Medicare, and Medicaid programs which will have a huge impact on the U.S. economy.  It remains to be seen how the candidates will deal with the spending side of the economic equation.